Many of nobility, among them the Esterházy, Sárkány, Petőházi, Zeke, Viczay, Bessenyei, Töltössy, Fenessy, Cziráki, Ebergényi, Senyei families chose our church as their final resting place. This resulted in the several crypts created under the church, the nave as well as the Chapter House in the cloister.

We built a columbarium instead of the ‘commoners’ crypt’ which is to be found under the sanctuary. Volcanic stone panels were used to create columns where the burial urns are placed. We offer niches for one, two, three or four urns. Maintenance costs, the Catholic funeral rites, the inscription on the covering stone are included in its price If the funeral service is conducted as part of the Holy Mass, it can be followed on a screen. The Holy Mass held on the last Sunday of every month is held for the souls whose bodies rest in our columbarium awaiting Resurrection.

A special way for the funeral is the urn well funeral. In this case there is a large cave under the columbarium’s floor where the remains are kept.

We offer final resting place for our lost ones in a historical place, close to our nation’s prominent families. 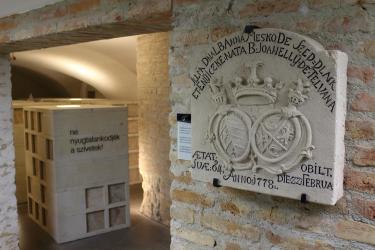 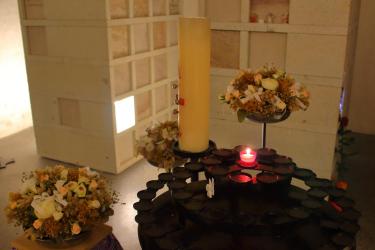